Recently, The Bigdawg and Paul Show, along with Radio Legend Mick Dolan, as well as many of those involved in the Central Florida media were recently invited to The Fun Spot for Media Day. For those reviewers it included free ride wrist bands, food and drinks (beer, water, soda).

The Fun Spot America is located just off I-Drive and I-4 in Orlando’s tourist corridor and has expanded from its commercial catch phase of It’s HUGE to It’s HUGE-ER! Not as big but still HUGE, or costly or busy as some of O-towns bigger theme parks, but a great nice affordable family park none the less. They also offer FREE parking and you can enter the park for free, but must pay for a wrist band to ride the attractions.

Now let me go back in time for a moment say 1984 and ’85 I remember when the Fun Spot was called Fun and Wheels and located at the other end of I-Drive and Sandlake Rd. and had a single go-kart track, and a place for you to record Karaoke (which just began its stateside phenomenon) onto cassette tapes.  I along with several buddies would spend a lot of cash and drive go-karts on a single track for hours at a time and even close the place down a time or to.

Fast forward to today and WOW! Now they have at least 4 go-kart tracks, some multilevel ones and one for speed and several other rides such as White Lightening Orlando’s only wooden roller coaster, and the World’s second tallest ride the Sky Coaster along with family fun rides so pretty much everyone that comes out can get in on something fun. Fun Sport also has an Arcade that includes newer games and some retro ones for those of us that remember a time before you played games in front of the TV.

My 1st trip into the park I hopped aboard the White Lightening Wooden Roller Coaster! I had a great ride on this and aside from how quiet the wood roller coaster is except for the screams of those riding it, it was extremely fast. It truly is White Lightening and once it starts it’s a quick thrill ride to the very end! So much so you want to just keep riding it as “Scuba” Ski Gowtizke from America Coaster Enthusiast told me that he had already ridden it up to 15 times in just the 45 minutes it was open to the media. The folks from Theme Park Review were onsite as well taking lots of video for the new ride.

The other new coaster was for those that like to test the G Forces. You strapped in and hung on as you your feet dangle fly free on Freedom Flyer.

Other attractions in the Park that also include a restaurant with the usual foods you would find at a theme park, fair, or carnival, but also featured a deli type area as well. They can also cater to private parties and serve Beer and Wine. Radio Legend Mick Dolan and I tried tested our driving skills at the Go-Karts and for a guy that complains he has a bad back he was able to beat me 3 out of the 4 times we raced. The 4th track was still being prepped for their June 18th Grand Opening but it looks bigger… err…ah… HUGE-ER than the others, so I look forward to that one the next time I visit down there.

I left Mick Dolan at the Sky Coaster which is basically like a 250 feet above the ground sling shot, part bungee, hand gliding and skydiving adventure that lets you see way above the park and I-Drive itself.

It’s a great stop off for dad and the kids when mom wants to hit the outlet malls, or something for mom to keep the kids busy while dad is at the Bass World. Either way it’s a great time.

If you haven’t been in a while it’s made a nice expansion with some quality new rides that give you that big park feel in addition to the stuff they’ve had established for years and doesn’t kill the wallet too bad!

Let me know when you visit and maybe we’ll race on the new Go Cart track!

Have a Great One and Keep It Between The Ditches! Free Sword Swallowing Demos at Ripley’s Believe It or Not: Feb 28 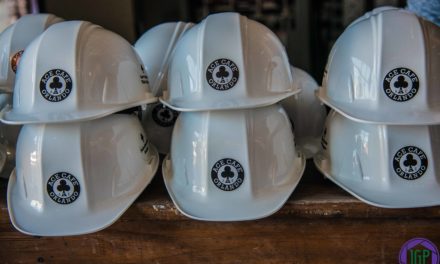 Ace Cafe to Open This Spring in Downtown Orlando